I’m reflecting back since I send out an update and can’t believe that 5 months have passed! I have intentionally slowed down quite a bit this summer considering the events over the past almost year and a half since the accident. I am also coming upon the anniversary of my Dad’s unexpected passing. Time to pause and reflect.

Prince’s sudden death in April impacted me a lot. I had a special trip planned to France with my sister for the end of May. I was determined to give myself the gift of rest, reflection, and no self-inflicted pressure.  I'll be posting more about that trip later.

Gratefully, the musical muse continues to flow. In April of this year I released my first official music video of “Can’t Hold It In” and was very happy with the outcome. I was moved by the generous offerings of people and their time and talents to make it happen.  That video is already posted here on my site.

It will be 2 years this month since the original release date of Resistance. Due to the accident, which prevented me from promoting the album, it was re-released again in November 2015. Thank you for continuing to share Resistance with others.

I cannot wait to share new songs with you!! It has been a rich year for writing material and I look forward to recording the next project. I am grateful for your continued support and encouragement to keep making music.

Blessings to you hot ones! 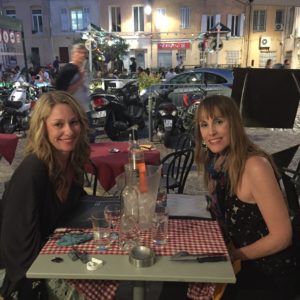 My sister Ali and I dining in Aix-En Provence.

View all posts by: Jenna